Many of you will know that I am an Apple fanboy, and I am not hiding from that social-tag. But of course this does not mean by default that everything Apple Inc is or is not doing is perfect. After all, I am not a Justin Bieber cult cow (there are limits). Many things can be wrong with a company, pricing, support, community, products and/or services and still be a damn lot better than the frustrating alternative.

One device I have fallen in love with is the iPad. It’s an outstanding media consumption and mobile device that for me personally means a lot. But as you can guess, it’s not perfect. And perhaps I am wrong, but this article is about my experience with it and an annoying side-effect of wanting everything to be pixel-perfect.

Not even a handful of years ago I had various tablets in my hand. A flip-over monitor on a laptop from Dell, Microsoft powered. And later some Android ones. But once I got the iPad in my hands the quality of the screen, the clarity and how awesome the apps look on iOS makes the device a joy to use. I waited until the second generation before I purchased one for myself. A year before I finished waiting to get an iPhone. I got the iPhone4, with retina display. And despite my fear that going from ‘retina’ to iPad2’s monitor it would be a downer I was pleasantly surprised it was not a disappointment at all. (Yes, at the point of typing this article the third generation iPad has been released with retina display, amazing).

Another positive experience. The great developer and start up community all over the world that made half a billion of apps for every possible situation and game you can imagine. And they look stunning. But in this article I will not talk about my little gripe regarding developers and the iPad, but focus on Apple itself. So check back for part 2 soon.

Okay, all this together means I have a few great devices, great apps, and a positive experience with Apple. And as a fanboy I say “As expected”. So let’s get to the negative part of what annoys me about the iPad, in regards to what I believe to be some choices made by Apple.

Yes, it’s amazing that you can have an iPhone application and install it on the iPad as well. And it will run in what I believe is the emulator (you get a black border and it is separate from the top-bar and the (2x) control in the bottom right. I love it. It means that developers can get their app out early and continue development and release an update in the future to support the native iPad displays.

The downside is of course that the app runs on an old iPhone resolution. And that it’s not so sharp, stunning, and certainly not using the native screen-estate which makes apps on the iPad look amazing. You can thankfully click on (2x) to zoom in. But it’s really just that. Everything’s doubled and resource images, app images, UIText and fronts are not rendered. To be honest, they look horrendous. And my opinion is “if I wanted to have apps look like shit, I’d have gone with a 50 Euro Android phone or something”, but here we are.

What surprises me more is that almost everybody I talk to actually agrees with me. But it then surprises me that high profile apps such as Instagram (random example) after a couple of years go for the money and release to Android before giving at least an initial update to support the iPad. But more about that in Part 2 of this article.

I hope you understand those numbers, I am trying to. Because the iPhone-on-iPad screen seems to be 480-by-320-pixel resolution (at least, on my iPad2).

So this means it’s basically the old iPhone resolution, within the resolution of the iPad. Without upscaling / rendering support for the native toolkit for fonts, image rendering and what not. Resulting in poor display, even compared to running it on the iPhone4.

The iPhone4 and 4s both have a retina display. And if you run an older app on it you probably won’t notice a difference. iOS takes advantage of retina and apps look as good as they can get. Especially if the developers take the time to consider retina displays.

So why doesn’t the iPad run iPhone apps in the ’emulator’ on the iPhone4 / 4s resolution? Even if it can’t properly go full-screen it would at least be able to take advantage of the available pixels. I can’t be convinced at this point as to why it would look worse in comparison.

Not doing this feels very Microsoft-ish rather than Steve Job-ish.

Tweetbot is an example of how I personally expect an iOS app to adapt to the device: 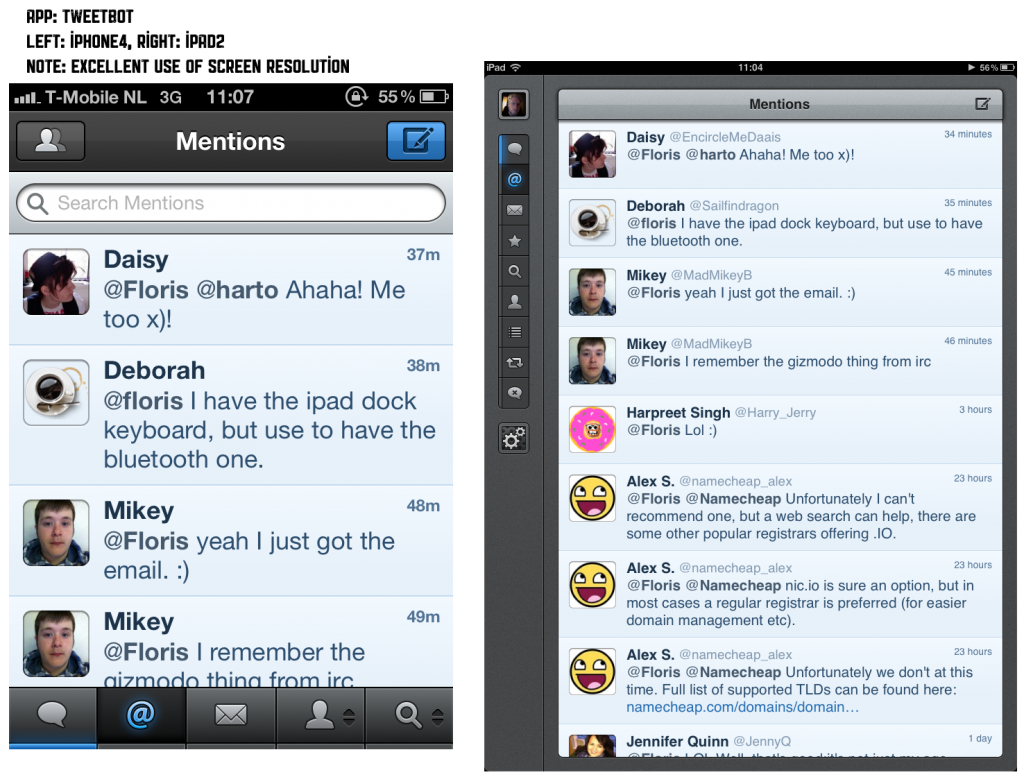 Maybe since I am a poor developer I might not be aware of technical limitations, but it’s a frustration that hasn’t been addressed after a few years. And for the amount of money I am paying I kinda feel I can expect a little progress to have the devices continue to stand out on top of the rest. And sure, that might be selfish, but remember please when Steve Jobs introduced the iPhone in 2007 saying it’s five year ahead of the market. It’s five years later and these little frustrations prevent it from staying ahead of the market.

Maybe it’s very simple: If it looks poor, perhaps it’s a motivator for developers to update their app. But I will get into that in part 2. Right now I think it’s arrogant to depend on what developers would do.

Below is an example, and I used Instagram randomly (Love the app btw), where on the left you can see how it loads on my iPad2, I have to zoom in 2x but the images look horrible. They look almost stunning on my iPhone4 retina display. You can see they’re 480×320 (cut-out) but the third one in the list is a screenshot from running Instagram on my iPhone4. Almost the same size as the iPad, and much better looking fonts (and on the retina display they look even better). And finally the fourth one on the right which is like the first one, but zoomed in 2x, you can compare best when watching the below image at 100% the textures and fonts are blurry, and in my opinion not up to par.

Okay, enough complaining on my part for now. I could go into other limitations of the iPhone-on-iPad experience, such as landscape support, better rotation support, no native keyboard support, etc. But I really wanted to focus on the quality of apps on the iPad. I just had to get it out of my system.

By the way, I will update this article over time as I get more information, perhaps link to resources, and I will include some example images. But please do leave a comment as I am curious to hear what your opinion is.