Screen Protection for the iPad

Simplicity behind the complexity, that’s what I like and respect in companies, hardware, and software. Apple, Google, Microsoft, and many others aim for this. Google’s homepage is a big input bar, and without user-interaction it updates the same page with results and offers suggestions. Apple puts a lot of technology in your hands, and you as consumer don’t even realise it. And Microsoft tries it’s best. I guess. But, they all do their best to take away the complexity, the technology, the features, and put them right in your hands with great designs, simple designs, and functional usability, and graphical interfaces. And simply put: I really like that. Especially the way Apple pays very close attention to detail.

And that is also why I feel almost dirty when I try a bright coloured bumper for the iPhone, or put some ugly USB gamers-keyboard on the iMac, or if I put the MacBook Pro in a suitcase where it’s getting scratched by pencils or because of the freedom it has to move around. And why I try to find companies and products that is designed by showing respect for the product and put detail into it’s features.

The iPad gets a thin but good quality case or Apple inspired stand, the iMac gets the magic trackpad as accessory, the MacBook Pro gets a beautiful designed but still shock resistant sleeve, etc. Since the iPad has basically replaced my laptops, I am always on the lookup for iPad accessories.

The screen is glass, it’s important, and it isn’t only prone to fingerprints and dust, but to cracking because you hit it against something, or drop it because you’re stupid, or people putting stuff on top of it. (shakes head) So protection around it to cover the back and the sides of an iPhone or iPad is one thing, but the screen itself is usually ignored. The iPhone4 I have still has 0 (zeerrrooo) scratches on it, but nearing the end of it’s second year I am sure it won’t be long now. The iPad2 I have is still scratch free on the front and the back, which, compared to others who have an iPad as well, is a miracle. I use the stand (see link above) almost daily, but yep, it doesn’t protect the screen.

I have a bit of a problem though, I fear because the surface is bigger, and because there are so many crappy products out there riding the success of the iPad that I don’t just want to put something on the iPad. Sure, laugh at me. Unlike you, I actually do care about the products I really like, really use everyday, and really saved up a good chunk of money for to finally buy. You’re free to spit on yours and throw it off a cliff. But I for one do not want to just put something sticky to the glass surface to find out I am left with glue I can’t get rid off. Or get scratches for some reason. Or I pull the screen off because the plastic layer getting pulled on is stronger than the tight fit of the rubber/glued glass on the iPad itself. Why risk it? I’ve therefor never bothered to even consider buying a protection screen for the iPad.

As previously, I have been in contact with the folks at mobilefun.co.uk and talked to their sales representative who was giving me enough information and insurance that things have improved greatly over the last year and that there are products worth trying. And she was willing to ship me a product from Power Support to try (super thanks). It arrived today and before I share my experience I will share my expectations – and as you can imagine, they are pretty low to start with.

I’ve seen various products on the market, from flexible layers of super thin protection layers that you have to make wet, put in place, and pray you didn’t get any liquid in the device. To various layered multi-step protection layers you have to apply, pull to un-dust, and remove again to fit, etc. I dunno, all sorts of things. There are technologies for anti glare, anti finger print, blah blah. Whatever! If you don’t want a fingerprint on it, don’t buy a touch device. I am not THAT anal about it. Nothing you can’t clean easily. I am more concerned about protecting th screen from shattering, from scratches because of some stupid mistake, and that kinda stuff.

My expectations are that it is perhaps too flexible, making it hard to apply, misalignment is a problem as I noticed when applying a screen protector to my iPhone, and that’s only a super small screen (hey Apple, that Samsung Note has a great big screen, c’mon now, get with it). I also exptect it to be a multi-step installation. Where I have to remove dust and fingerprints, do some sort of weird step, pull back a layer and hope it won’t go wrong. And I expect it to not have any influence on the touch sensitivity. And knowing the delivery services, I have no idea how this is going to arrive in the mail. Folded, most likely, haha. 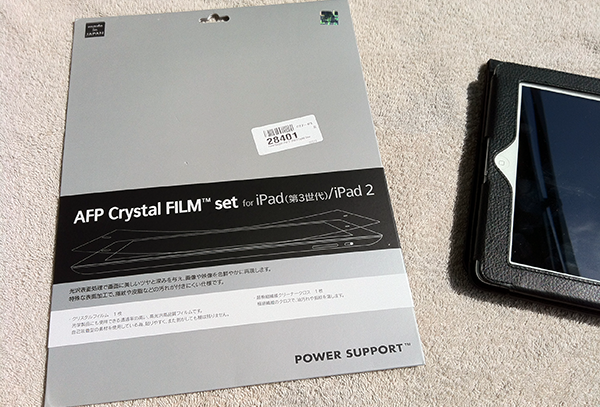 To my surprise it already arrived today, a bit unexpected. But yay, I guess. it’s beautiful weather with hardly any wind. I moved to the balcony where I took some pictures, cleaned the iPad, and applied the screen protector. And yeah, I did have a few bubbles.

I noticed a few simple things. The price, these screen protectors are way too expensive. As you can see here. It’s around 35 quid, and that’s just a sheet. It doesn’t cover the back, nor does it come with a second one (as backup). According to the review on that page their customer service is excellent, I hope that’s indeed the case. I would probably hurt a cute bunny rabbit if this would go wrong (PETA, stfu, no rabbits are hurt during the applying of this screen protector). It did not arrive folded or damaged in any matter. DHL delivered it in good quality. And the last surprise is that it didn’t come with a thingy to rub the bubbles out.

Bonus surprise, the instructions were all in Japanese. 何ですか？

Okay, the product in question is the AFP Crystal Film Set for iPad, by Power Support, which is a two layer film of which you align the top over the home button and remove the other layer. This way you don’t have to touch it of course. It leaves no glue behind or anything like that. Huge thumbs up. And it comes with a screen cleaning cloth. However, I used the awesome screen cleaning product that I received as a gift from my Australian friend Justin (Thanks!). And the protection layer doesn’t seem to hinder the responsiveness of the screen, at all.

Pro tip: Any, and I mean any, bit of dust on the screen results in a bubble of air, no way around it. Any air bubbles you do get you can rub out, and they will go away. Fail level: enormous. Risk of crying: high. 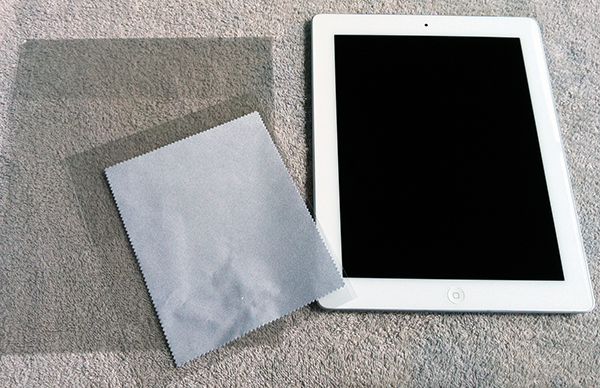 After cleaning the iPad thoroughly I put it on a towel outside and cleaned it again just before applying the screen protection layer. taking them apart was easier than I thought, aligning it almost went wrong but I noticed this quickly, thankfully. Then it was just a matter of pulling back the second layer while letting gravity do the rest to the layer that goes on the iPad.

I had a huge bubble near the home button, and a group of four small ones clustered together. But thankfully they were very easy to rub out. I just slowly moved them to the edge of the iPad and they popped away through the edge. Phew. I have one very small bubble left, but to be honest I can only see it because I know where it is.

This went way better than I thought it would go, but it is still such a hassle really to just apply a protection layer. I don’t even want to think about it if the screen didn’t go on right, or if I find out there was way more dust on the screen than I have control over. I want a simple way to protect the screen, and getting an ugly display because of the protection is therefor not an option. 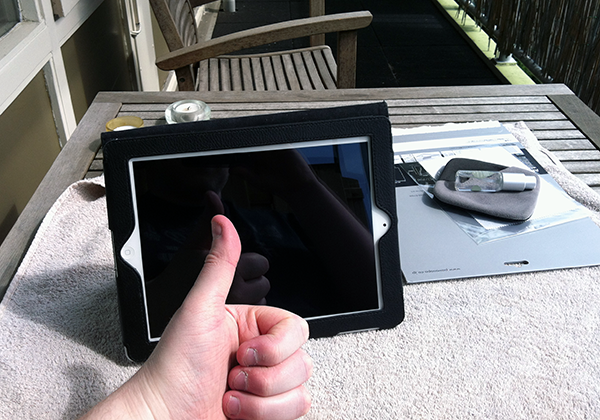 A positive experience, and the cons are clear: It’s good quality, it’s not too thin, it’s easy to apply, and if you get lucky, you won’t cry because of the cons; It’s too expensive, this is not rocket science in my opinion. And for this money you’d expect at least English instruction, and a backup-film in case it goes horribly wrong. Or a little thingy to rub any bubbles out without damaging the protection screen. But overall, this was a positive experience and I can’t even tell I have an extra layer on my iPad2. And I can still use all my cases. And a huge plus is that this didn’t come with additional layers and steps, to complicate installation. Or that you have to use liquid to make sure this fits, etc.

Would I recommend you to consider adding extra protection to your hardware? Yeah. Why? Because I don’t think it’s a bad thing that after 3 years the devices you have are still awesome looking.