Finding the right keyboard has always been a huge problem for me. Not because I am left-handed, that has certainly nothing to do with it. But because of my, well, let’s face it, addiction to being connected, addiction to using technology. I require a bit of comfort, something that lets me type fast, and fights RSI a little bit. The Apple keyboards are nothing compared to the old block of plastic that Logitech used to sell, a comfort deluxe or something like that. Split keyboard, natural aligned key hight, and a thing you can stick to it in the front to help put your wrists in the right position. Apple, however, just takes the keys, makes them as thin and flat as possible, and uses their laptop approach for their stand-alone keyboards. Not that I am complaining, I love the keyboards, but I am sure they can’t match up against usability to that old Logitech one. Regardless. These are old input devices, slowly being pushed of their long standing first place position, followed by the mouse, stylus, etc. Thanks to the ever so increasing technologies introducing us to simpler user interfaces, improved usabilities and modern operating systems. An example: touch. 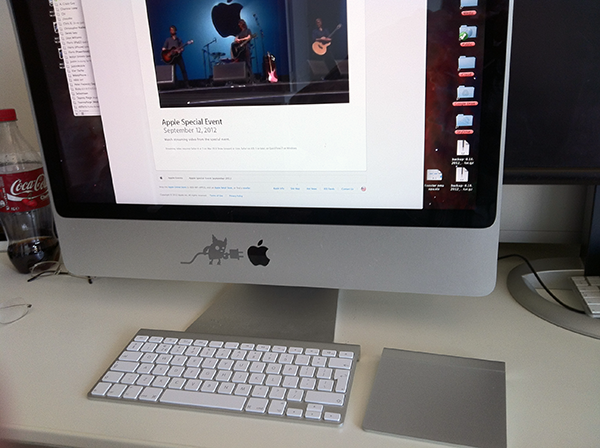 But, that doesn’t mean I won’t need a keyboard, and that the way I handle keyboards isn’t changing either. That’s what this article is about. Because Apple (yes, I am a fanboy) does do things right, even if they do it wrong. And boy, this new keyboard that just arrived is so enjoyable to type on. So smooth, so sensitive, so thin, so well designed, and still versatile, I am glad they are not doing to their keyboards what they have done to their mice.

Back in the day when I moved to Apple I purchased a few of those heavy big white wired, and wireless, keyboards. They were great, sorta. They were great for collecting dust, mainly. Even if you would use them. The keys felt like you were giving them a workout. The Powerbook keyboard had thin, subtle, and smooth keys that made a sound like you were hacking the Matrix. Pure sex. Compared to those bricks. Heck, compared to the Logitech. And that is what I wanted. Forever. If not only because I am a fanboy, but more importantly because I use the keyboard – every – single – day. And as with the Logitech one, as with the old white ones, they wear and tear, because of constant usage. When Apple introduced the solid aluminium enclosure keyboard in 2007 (same year as they introduced the first iPhone by the way), I felt it was time to match my Mac Pro’s silvery aluminium case. But I wanted to have more USB ports, and I wanted to have the numeric pad; I went wired.

If only it had the same backlit feature that Powerbook keyboard had, it would have been a dream. But let’s not get caught in the Apple reality distortion field shall we?

During this period the Logitech one broke, though I think I still have it in a closet somewhere, for nostalgia reasons. And the white keyboards felt like a failed product, compared to the new aluminium one. And since it was USB wired, I could use it on the Mac Pro, and the Powerbook.

But times change. And so does technology. 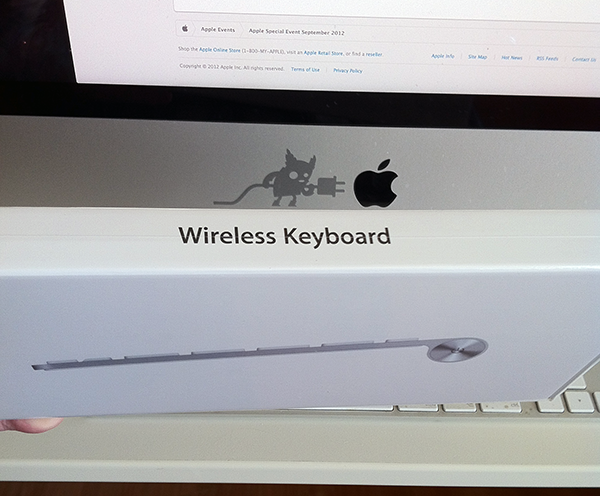 Apple has slightly updated their solid aluminium enclosure keyboards, wired and wireless. The keys are less slippery, they feel a bit thinner, and the distance seems to be a tiny bit different, but making for a more natural and always bulls-eye hit on the key during fast typing. And it’s size I can’t confirm, but it fits perfectly with the Magic Track Pad touch mouse.. thing.

But I have also got an iMac now, and iOS devices, so the keyboard to buy next has to be wireless. That way I can use it on all. Of course, it also means charging batteries, and lack of USB ports; compared to the wired one. But the convenience of a tweaked keyboard, that is light, easy to take with you, and usable on all Apple devices with bluetooth support. No problem. I also won’t miss USB either, a lot of the external stuff has gone wireless, such as the touch pad, the mouse, and I backup to the cloud now where possible.

Less wires, goooooood. Charging batteries though, still a pain. Hey Apple, when can I go to the Apple store to buy a thin layer table top that charges whatever Apple device I put on it? That way I don’t have to think about batteries anymore. C’mon now. hehe. 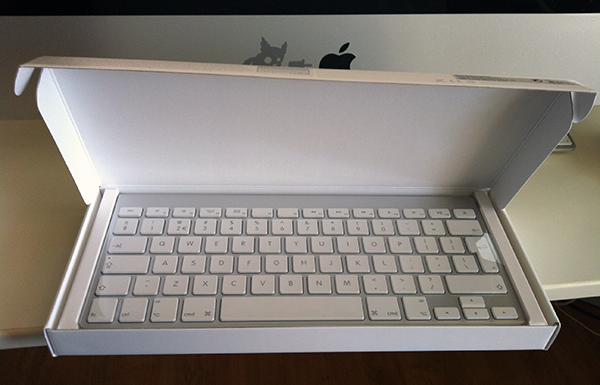 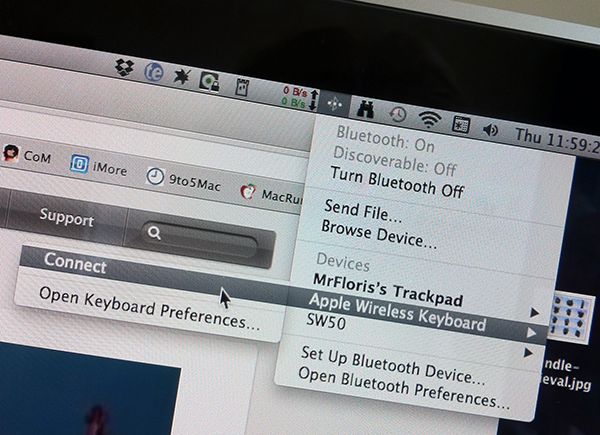 It’s just so easy to install the wireless keyboard, it’s kinda silly that you still have to pair with a unique number. If only that was ‘discover > that one > press enter’, and you press enter on the keyboard. DONE! Anyway, I desire security over convenience still. Installing it was super easy. Unpack from box, click the button on the right, and click on the Bluetooth icon in the menubar, select the new keyboard and type in the pair-code. No downloads, no drivers, no reboots, none of that old-fashioned nonsense. I am glad these old 70’s technologies are getting tweaked over the years. My point being, I wish it was easier to switch between devices, but knowing how it used to be, it’s a breeze. We’re just spoiled these days.

The wireless keyboard is great, I am glad I replaced my 2007 wired one. And I am glad I gained the feature of using it on the iOS devices. It’s a strong and solid keyboard with textile feedback. Sometimes, that’s just what you need. I wouldn’t buy an RIS rubber, bendable Logitech iPad case keyboard as an extra one on the table. Simplicity and quality wins here. Thanks Apple. It’s why I am still a fanboy.

No regrets sticking to what works great, and updating it to make the most out of it, thanks to it being wireless.