Since 2007 when Steve Jobs in his keynote announced the iPhone it has been a question that comes up at least once a month. “I just got an iPhone (or iPad), which iOS apps should I really get?”

tl;dr Curious to find out which apps I am using, or just got a new iPhone or iPad and want to know which apps to get? These are the ones I’ve been using in 2015 and wish to continue using in 2016.

Please do realise that I might have a personal preference. Maybe one app gives me an advantage over a default feature, or maybe I have alternative motives to use it. Like Dropbox, and I will use it as an example in a minute. What I am trying to say is that even if I think Dropbox is a must, maybe Airdrop is enough for how you use your phone. Just keep that in mind.

Sometimes I also prefer a paid application like Tweetbot over the free and official Twitter app. If you like to keep things cheap, then popular alternatives are just fine.

And a few apps are ‘official’ apps, I strongly recommend to simply never use alternatives. With this I mean that I think it is ‘smart’ to use your official on-line banking app, instead of a perhaps better looking one. You never know what happens with the credentials that you submit.

Okay, those are all the tips, let’s get through a few apps and games. Oh, one more tip. If an app is not free, put it on your wish-list if you can wait for holidays, I got loads of five and ten euro apps for just a euro or even free by simply waiting for Cyber-monday or Christmas. 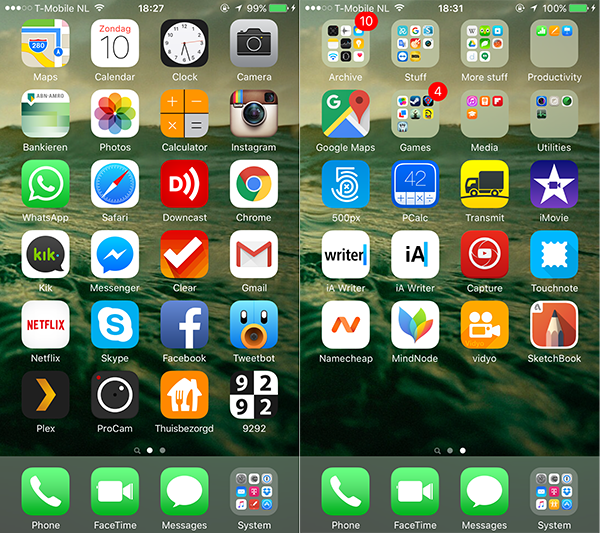 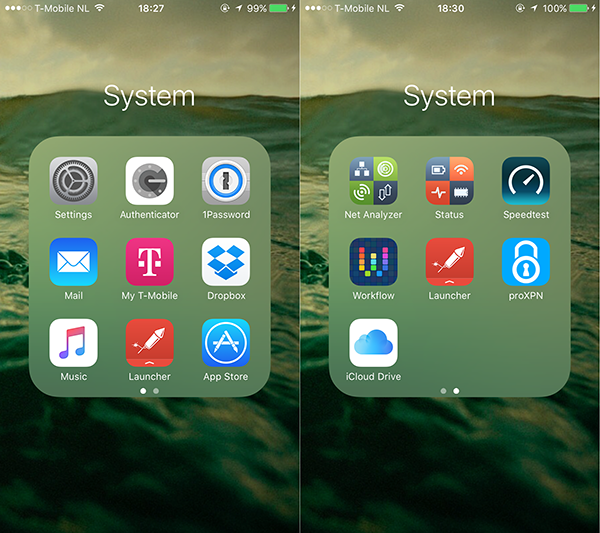 A few years ago I would have said that Skype is a must. It’s an app that runs on Android, Windows, Mac, Linux, and iOS. Making calls cheap, even video calling, and also text messaging, and file sharing. It’s almost perfect. But Microsoft owns it now and it’s showing. And with the majority of my friends on iOS devices and Mac systems, FaceTime and iMessage is what I use instead. I do have Skype, Kik, Facebook Messenger and WhatsApp, but only for those who just refuse to switch. I am down to just a few contacts per app. Since they are default apps (FT/iMsg) I can’t really recommend them, but, just saying.. it’s what I use all the time now.

But a few other stock apps or official apps I feel are a must to replace with great alternatives. Personally I am quite into listening to podcasts while I commute, and I like the simplicity of a great todo application, and I am a sucker for Gmail. So instead of using the Apple podcast app, I use Downcast app. Instead of the reminder or notes app by Apple, I use Clear app. And instead of the default mail app by Apple, I use Google’s Gmail app quite a lot. I’ve tried other mail apps by the way, and they are amazing – but they keep shutting down or changing ownership or their upgrades simply start sucking.

I’ve become quite addicted to watching media on my big-screen iPhone 6s Plus (compared to my older iPhone 5s screen) and I also love to consume media through the iPad Air 2. So I am recommending to use Netflix and Plex. Netflix requires a subscription and you don’t have to own the content. They offer it, and for a fixed amount you can watch movies and tv, without a limit. They stream it in HD quality to you. Plex is the Netflix for your own content. If you have a server where you can run the Plex server on, you can point the movies, music and tv to their respected locations, and stream it to any of your devices. Which is fantastic.

There are a few very specific camera applications I’d love to recommend, but only if you are into photography. Like ProCam and Camera Plus (the white icon one). But, the app I use for almost everything, is the default one by Apple. I really love it.

Drawing with your finger or the stylus, or now the Pencil on the iPad Pro, it’s possible on iOS, and the app I think is the most versatile is Sketchbook. The interface is simplistic, despite it’s variety of features. It supports layers, and high quality canvas and the zooming in/out is very responsive too. I enjoy it for quick note-taking scribbles, as well as hours of just doodling of ideas, etc. I think if you want to draw on iOS this is a must have. Once I really liked Paper from 53, but their current version took away everything I liked about it. A great alternative to Sketchbook is ProCreate. I guess it depends on what you prefer, and how professionally you are with drawing on the iPad.

Okay, let’s talk about Dropbox. I am a Pro user, for a few years now. I am locked in on using it. My motives are file-sharing (between devices, as well as having access to over a terabyte of data on any device I own, as well as sharing between me and my friends, plus, shared dropbox folders), easy syncing of data, exporting from programs so I can import it into other programs, and backing up. A screenshot gets uploaded to Dropbox in the background. If my phone dies, falls in the water, gets stolen, or whatever. I basically haven’t lost anything as most of it is already in the cloud. So, I could not live without it. It’s a must for me.

That said, maybe you don’t need any of that. And you just want to give a picture to another device or another person with an iOS device. Then the default Airdrop feature is enough. Many apps these days can also sync over iCloud, so you might not need Dropbox now. It just depends on how you use your devices.

For Twitter I use Tweetbot, I just find it an easier interface. They found a way to be flexible with the Twitter features without throwing them in your face. The swipe gestures and options of how to display a tweet is just the way I like it. In the official Twitter app I keep miss-clicking. It’s a must have for me, I am still using Twitter on a daily basis.

A real must-have is 1Password. A login/notes manages that is really secure and has great support. They have builds for Mac/Win/Nix and iOS/Android. Syncing is fast, using it and using it in popular apps that support it, etc. It really is fantastic. I couldn’t do without it. My passwords are impossible to remember, 32 characters long if possible, strong, and unique. When I login on a device for the first time I login to my iTunes/Apple/iCloud ID stuff, and get the 1Password app. Before I even get any of the others.

Together with 1Password I get the Google Authenticator (not using any other one, please, get the Google one). I use it for Dropbox, Facebook, Google, and a couple of others. It lets me generate unique codes to verify it’s me that’s attempting to login somewhere. It’s a must have for me.

Before I go through a list of a handful of apps I really like and use quite a bit. I will do one more must-have app for those who want to take notes, write out stuff, etc. It’s iA Writer. they have a pro version too – I love it. The iPad with a wireless Apple keyboard and iA Writer is many hours of stories, poems, letters, blog articles, etc in the summer mornings or somewhere in a diner. A must have for me.

Okay, let’s mention a few apps that are a must-have for me, but I can imagine a lot of people can do without.

Chrome (By Google), as alternative to Safari, sometimes I really need an alternative browser.

9292, a Dutch app that tells me how to get somewhere using public transportation. It’s my companion when I am going places alone. My eyes are really bad, this really helps.

The T-Mobile app, this way I can see how much of the 12GB data I have left, and what my monthly bill is going to be. Maybe there’s an alternative for your telecom provider, but I strongly recommend installing it. Knowing what you use and don’t use makes it more fun to be off-wifi with your phone.

Talking about my phone, I use the Speedtest app, together with Status app and Net Analyzer app. They allow me to quickly check various network things when I am on the road or at someone’s place and trying to figure out why the network is slow or not working. Oh, together with these tools I have a professional VPN service with no traffic and speed limit, that doesn’t log, so I can connect to public wifi spots if I really need to (I avoid them for 99% of the time – so should you).

PCalc app is my calculator alternative. It supports so much more than you can imagine, plus, it has a handy widget for the dropdown. So I can use it without unlocking my phone or in any app. Amazing.

And finally, the last app that I want to mention before I talk gaming is the Transmit app, or rather, any app from the Panic guys (they have an SSH client, FTP client, and Code-editor client)

Okay, gaming. This is tough, because I am the type of person that can spend weeks on a game, sometimes months, and then never play it again. Some games just deserve to be mentioned, please consider playing them if you love this type of design and gameplay.

A must have game is Monument Valley, it’s a puzzle game like you perhaps haven’t seen before. It is pure Zen and keeps you busy for a while without getting frustrated if you fail. A true feel-good game where every screenshot is worthy a A3 print poster on your wall.

The same feel-good Zen style game is Alto’s Adventure. The ambience, the environment, the mood, I can’t even explain it. You’re snowboarding through the landscape, collecting points taking lamas and doing tricks, while avoiding rocks and gaps, and bad guys. It is really hard to put down sometimes.

A third must-have game as far as I am concerned is the totally different than Zen game Don’t Starve, where you have to survive the nights and a cold long winter collecting and crafting materials. Stay alive, eat enough, really.. you don’t want to starve. It looks completely different but equally beautiful than Alto or Monument Valley, but sucks you in just as hard.

Okay, well, that is it I guess, I could go on forever and tell you to get Teamviewer if you’re a tech guy, or Duet if you want to use your iPhone or iPad as secondary monitor to your system. Or IMDB for trailers, or eh Workflow if you’re into GTD and being a productive busy-bee. Oh Launcher, which gives me shortcut widgets to quickly turn things on/off or specific actions in apps, etc. But, this blog is already way too long.