This is really cool. You can get early access as a developer or consumer to pre-releases of Apple’s operating systems. iOS for mobile, OSX for the desktop, and even their watchOS and tvOS. Sure, very early access is not free, and meant for developers who want a heads-up to learn about the new stuff so they can ready their apps and games, while others perhaps would love to help Apple with testing and reporting their software. What is free is what comes a little bit later, their public betas.

tl;dr Apple is willing to give you access to their unreleased software. You can pay as a developer, or sign up as a consumer. Once it’s on your device you can use it, test it, and report back any feedback. This blog is about my experience using their beta releases, as well my opinion as to why and when you should or shouldn’t consider using it. 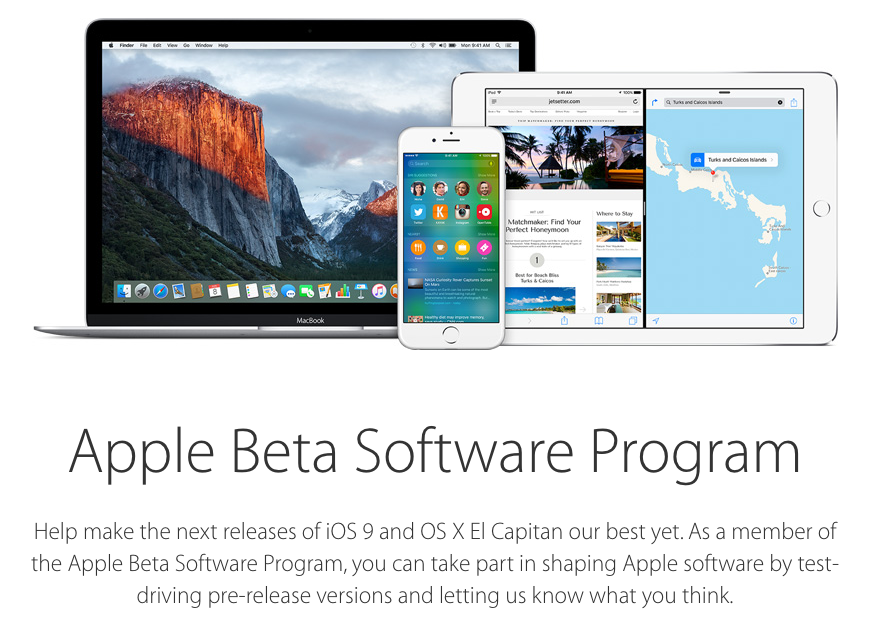 Before I give you the link, I think this is important to mention: Personally I think everybody should consider signing up and help test their software. It’s fun to get access early and learn what’s new. But, back-up. In case the beta doesn’t work well for you. This way you can revert back to the stable release, and restore your backup without any data loss. I will get into the details of this in a second.

Participating for their beta software should come with some thought. Do you need it, or just want it? Are you a tech person that wants to beta test stuff, or a developer, or just someone that thinks Apple’s latest and greatest is just cool to play with? The choices determine how serious you are about it, ergo, if you should even do this, and when to sign up.

If you understand what it means to run beta software, and are okay with backing up and restoring. Perhaps you’re a developer or someone who just needs the latest and greatest. Perhaps jumping in very early with potentially unstable beta releases is you. You can sign up for $99 on https://developer.apple.com/, which gives you access to everything you need.

If you don’t quite understand what it means to run beta software, but want to give it a try. Maybe you want a bit more stable beta and try the latest and greatest and get a heads-up on others. Or perhaps you want to help beta test their software and give feedback. Maybe paying for being a developer isn’t you, but maybe signing up for the public beta is you. Which you can do here: https://beta.apple.com/. Yes it is free.

Either as developer or public beta tester, their pages are simple, easy to follow, clear instructions, and so far it has worked great with any device I’ve been able to test it with. And that’s one reason why I think it might be worth to consider being at least a public beta tester for something like iOS.

Okay, let’s be blunt here. If you really have no clue what the difference between a stable release or a beta release. And are bad with following instructions on how to backup your devices. Maybe this isn’t for you. But I do invite you to read those pages and perhaps learn a little and consider it. Also, when I do not think this is for you is when your device is from work, provided by someone else, for school, or in other words ‘a production device’. Stick to stable.

But, in my experience. If you have an iPhone you feel that ‘always needs to work’, for example.. if it’s the only way to dial emergency services, or get access to your bank details, etc. Don’t install a beta on it. But, like me, if you have an extra device like an iPad that’s for personal use, and after a little reading it seems the most used apps all work with that beta. Maybe that’s really fun to upgrade to a beta and give it a spin.

To answer the question “Will I have any problems running the beta?” I can only reply with: “Yes, of course, it’s a beta.” However, in my personal experience I’ve had no show stoppers, and if something big didn’t work there usually was a pretty quick beta upgrade within a week or so that fixed it. Most small issues are just tiny issues most won’t even notice. It really feels pretty stable. And that’s one of the other reasons why I think you could consider being a public beta tester.

Talking about my experience. My old iMac was starting to get pretty sluggish with Maverick and such. When El Capitan was introduced during their keynote. They explained the focus was on better supporting older devices, doing proper maintenance to existing things that needed an update. And to improve security, etc. I was like ‘Yes, time to test this’. Certain little things still feel sluggish, but my old iMac got pretty stable, with performance improvements overall. For me personally it was worth it.

Also, my iPhone I did not upgrade, like I mentioned earlier. I want the guarantee that calling works, socializing and gps works, online banking works, etc. I consider it a production device and as much as I would love to put a beta on it, I just decided to be patient. Instead, my iPad which I use for media consumption, drawing, and all that. I did upgrade. If something really doesn’t work I can report back on it, revert to a stable build and restore my backup. No harm done really. Just a bit of time wasted. And to be honest. It really hasn’t been a problem. A few glitchy interface behaviors, but no show stoppers or anything serious. 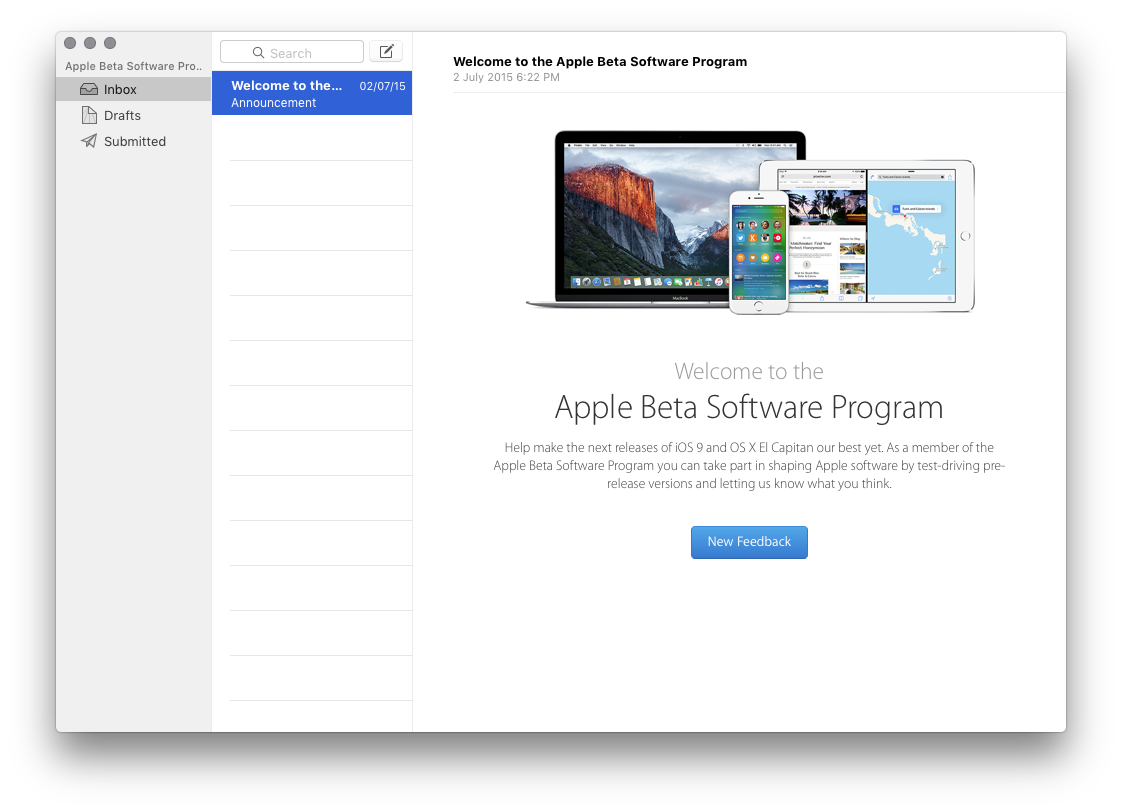 Maybe consider signing up? Participate? And if you do: take the time to try and reproduce an issue and remember how it happened. The beta comes with a feedback app (at least for iOS and OSX, not sure about tvOS and watchOS). Fill out some feedback and help improve their software. 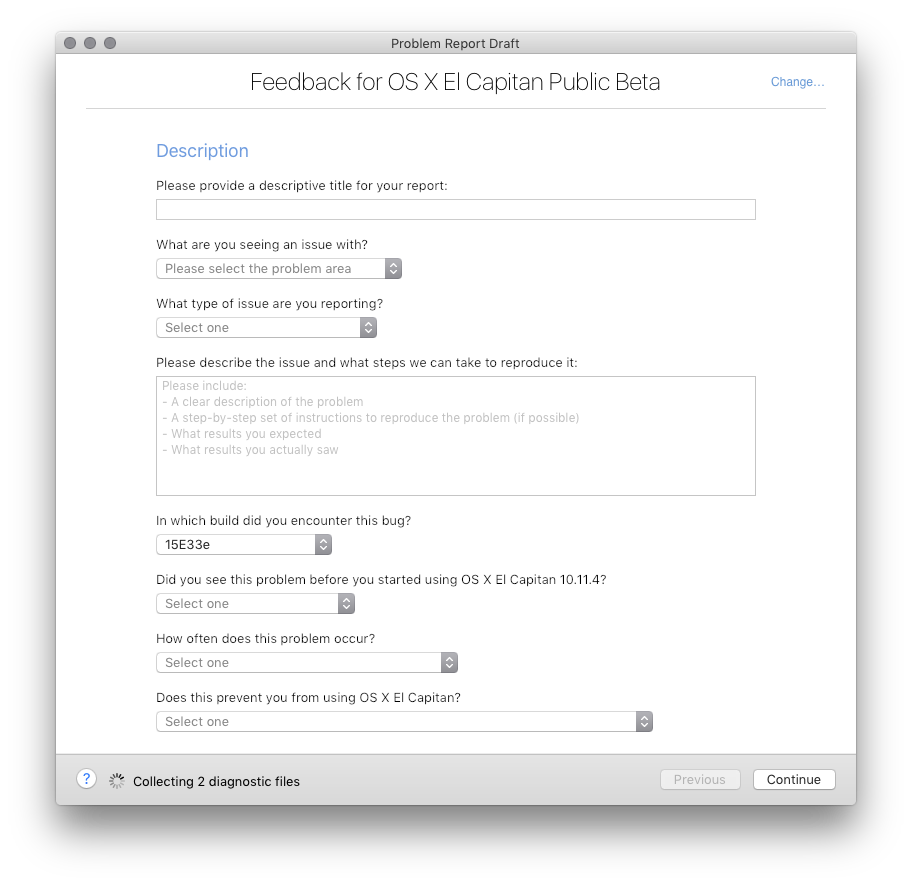 It is pretty cool that Apple started to allow people for signing up to become a beta tester. I am not sure if they automatically accept everybody. But I got the invite, put the profile on one of my devices. And I was able to go to the software update and the latest releases show up there. Upgrades are smooth, and I love playing with new interfaces, new programs, new features, options, etc. It also allows me to find bugs and report them back, as well as learn early what’s new and that allows me to help my friends and family a lot better when they upgrade eventually.

You saw a couple of days ago that I talked about iOS 10, and I can’t wait to see what Apple will introduce this summer, and then upgrade my iPad to the public beta later this year and get a heads up and something new to play with.