Saving for a new computer (2)

Milestone 2 reached! Awww yeah.. ‘An Update to: Saving for a new computer’

Let me just get this off my chest: Oh yeaaaaaah! And: Wow!

It has been twelve months since I’ve started the project of http://floris.computer/ – yep! Twelve months ago! And to my surprise this two year plan has reached the second milestone about six months early. Trust me when I say I will sleep a little better at night; a weight has been lifted off shoulder.

tl;dr This month I’ve reached the second milestone in this project. Saving up the money to buy the iMac (without upgrades and Apple Care). 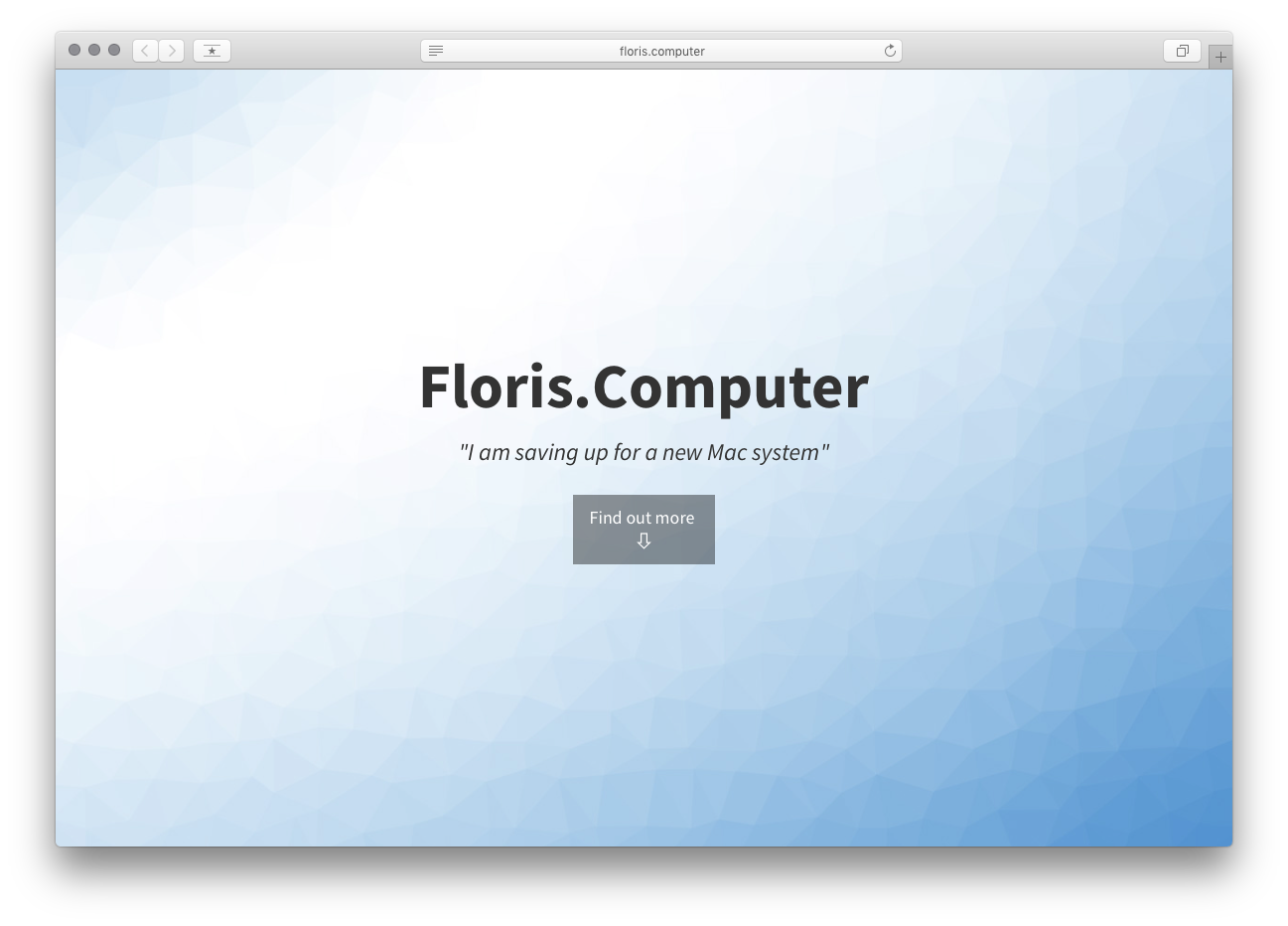 A couple of things I want to share, starting with a bit of history and a small disclaimer. This blog post is written on the morning, at the same spot as exactly twelve months ago. This spot is when I decided to open myself up to my friends and family and move forward with this plan to save up for a new iMac.

That life is tough, we all know it. Once we grow up we get responsibilities, bills, relationships, work, and have to deal with the issues we face daily. Mine’s my albinism, it’s a drag every day to deal with. It really isn’t fun. A side effect is that money is an issue for me. Paying the bills is already a monthly struggle to be honest, saving up money for something even more so.

To get through the days I do my best. I try to be asleep during the hours I have the most headaches. And I try to be awake during the nightly hours when I have them the least. But with Europe asleep, and the US at work, school, etc. It gets a bit lonely. Thankfully I am okay with being on my own, but socialising is an issue for me as well. Online and offline. My hobbies are therefore towards the creative side of things. Drawing, playing guitar, website development, and participating in online communities, as well as chatting with friends on Skype and FaceTime.

Computers have wear and tear, over time this iMac has received a bit of a beating. It was pretty much a base model, not configured to last past four years probably. But it will be nearly eight years old when the new one arrives. Which hopefully will last me another eight. And yes, I could be unhappy with a cheap 300 Euro machine from Dell or something, but I am an Apple person. Their thicker and easier to read font is a huge plus for my bad eyes. Their accessibility features are actually working. Their zoom is next to none. And I love how everything ‘just works’. It’s not perfect, but for me, it’s the solution. It’s a platform, and together with the mobile devices it’s working the way it helps me.

But yes, it comes at a price, and upgrades and insurance isn’t cheap for many, including me. This project, was a way for me to put my foot down and say to myself: I’ve tried saving, and failed – hard, but it’s time to take it way more serious and ensure that this dying system gets a worthy replacement so I am happier in life. Some people go on vacation, others end up in a relationship to build a family, others diet, but this is what I do 24/7, this is what’s important to me. This is what helps me be a happier person.

So, step one, I put my foot down and decided to compromise my comforts in life to put away what I can spare and hold myself publicly accountable with a website and tell my family and friends about it. There’s no way I can touch that money now. If you know me, you know that’s an embarrassment I couldn’t live with, if I’d to spend it on something else.

I’ve walked away from my apartment, to this spot. Nothing fancy or special. But it’s away from home and early in the morning, writing down my thoughts, writing down what I find in research. Coming up with a policy of what I am comfortable with telling the world, versus, asking them to help out if they so desire. While not being a spammer, while not begging for it, etc. The last thing I wanted was to seem like that, or make my friends uncomfortable if they don’t want to help out with this.

About that, I think a few people don’t realise that they’ve been a huge support in their own way. Financial or not. But, just having someone there to talk it over with, or to share progress with. Or who helps me find typing errors on the site. Or even the companies that helped out and gave me technical support etc. It all has contributed to me reaching this milestone. Sometimes that has been worth more than any financial personal gift that I’ve received. So to those people: mega thank you. Really!

Anyway, I sat here twelve months ago deciding on this plan, what I wanted to do, when I wanted to do it, and which milestones I have. What to share with the public or not, etc. I walked away scared that I am a huge failure and this is just going to cost me money and I end up with people judging me or thinking I am overreacting to all of this, because they’re used to their way of life and perhaps have a hard time imagining what something like this means to me. While at the same time feeling really happy that I’ve listened to someone who’s been an amazing inspiration to me and repeated what many have said: If you see something you want, really want, you just fucking take it. Otherwise it will never be yours.

Not thinking that was possible, imagine my surprise earlier this month when I realised it’s been twelve months already. And that I’ve reached this important second milestone, … already. Wow.

The first milestone was to get started, to just do it. Well, I didn’t want to dive in head deep, I tried to be smart about it. But if I didn’t put my foot down and just do it, we wouldn’t be here right now. Then to get through 2015, and reach that first thousand Euro. Fingers crossed that my birthday and what not would really help me get a boost. But, a thousand at the end of the Winter season. I still remember having a little dance thinking “plan B, CHECK, if it all goes to shit right now, worst case scenario, I have plan B, a thousand Euro for either repairing the iMac I have now. Or to get a hopefully good Windows box, or a cheap Mac Mini.”

The iMac died in eh, what was it, November 2013 or 2014. The PSU (Power Supply Unit), some damage to the motherboard, and a few other things. Thankfully Apple could repair it and I could afford it. Any money I had saved up for a new iMac was gone again – it’s when my idea about doing this project originally started, probably. The fear that I now had to really work on a backup solution (another 100 Euro gone for a new, reliable, external backup solution), and that the system could just stop working any day now. That fear was enough to motivate me that I really had to start thinking about a new system.

So plan A, reach the second and third milestone and finish this project. Plan B, try to save up at least enough money before December 2016 to get any type of replacement system to help me replace this iMac from March 2009 in case it dies tomorrow.

A deep releasing sigh came out when I reached that first milestone. 2015 was a success. It motivated me, showing me it was all possible. “Ha, I can actually do this!”

How it started, and how 2015 went, reaching that first milestone .. I’ve blogged about that here:
https://mrfloris.com/article/2089/saving-for-a-new-computer/

It’s now Spring 2016, and my plan was to double up on 2015 and reach two thousand by the Summer, hoping I’d get just about enough money to buy the iMac I actually need. And the third milestone around Christmas, which is that system with one or more upgrades, and at least Apple Care.

My jaw dropped when I had a few lucky moments of unexpected support from some awesome strangers and friends, as well as continued support from people like Justin and my parents. A few unexpected money-back from end-year-bills really helped as well.

And my jaw dropped even more so when I realised the counter matched the price of the iMac as it’s on sale right now in the Apple Store. I really can not believe that my plan B got upgraded to “If it all goes wrong, I can buy the iMac I want tomorrow, without the upgrades and without Apple Care”.

I basically reached my goal, with just over half a year to go until Apple releases a new iMac, I’ve reached my goal! For me, that means the world. My hands are shaking while typing this, I know, probably stupid, but, just.. wow.

Not only does this tell me that if I set my mind to something that there’s a chance it’s possible. But that there are people believing in me enough, understanding me enough, supporting me enough, to help me reach these goals. The boost of trust in myself, my confidence, and the motivation to push forward all the little projects and plans I have had on my mind since 2014, can be started and realised in 2017 when I have the new system. And it’s a system that will be lasting me long enough too.

I am not there yet. There are still variables, and we don’t know the future. But, as far as I am concerned, I can sleep a lot better at night. Finally, hard work paying off. For once. It was worth opening myself up to the public, holding myself accountable, and trusting those around me for support (financially or any other shape or form). I really am astounded that I got this far, and in exactly twelve months.

Oh my, thank you and you and you, and all of you so much. So so much. Just talking to me, helping me one way or the other. To give me a financial personal gift to help me reach the goal. From family, friends to strangers who want to help out. It’s amazing. Like I said, we’re not there yet, but boy are we close now.

Oh by the way, the website has undergone a few technical as well as cosmetic changes. All personal gifts are still listed, and I am still open to receiving your help if you would like to help me reach the third milestone together with me.

Please come check out the site again if you have the time, and thank you for reading this long blog post. 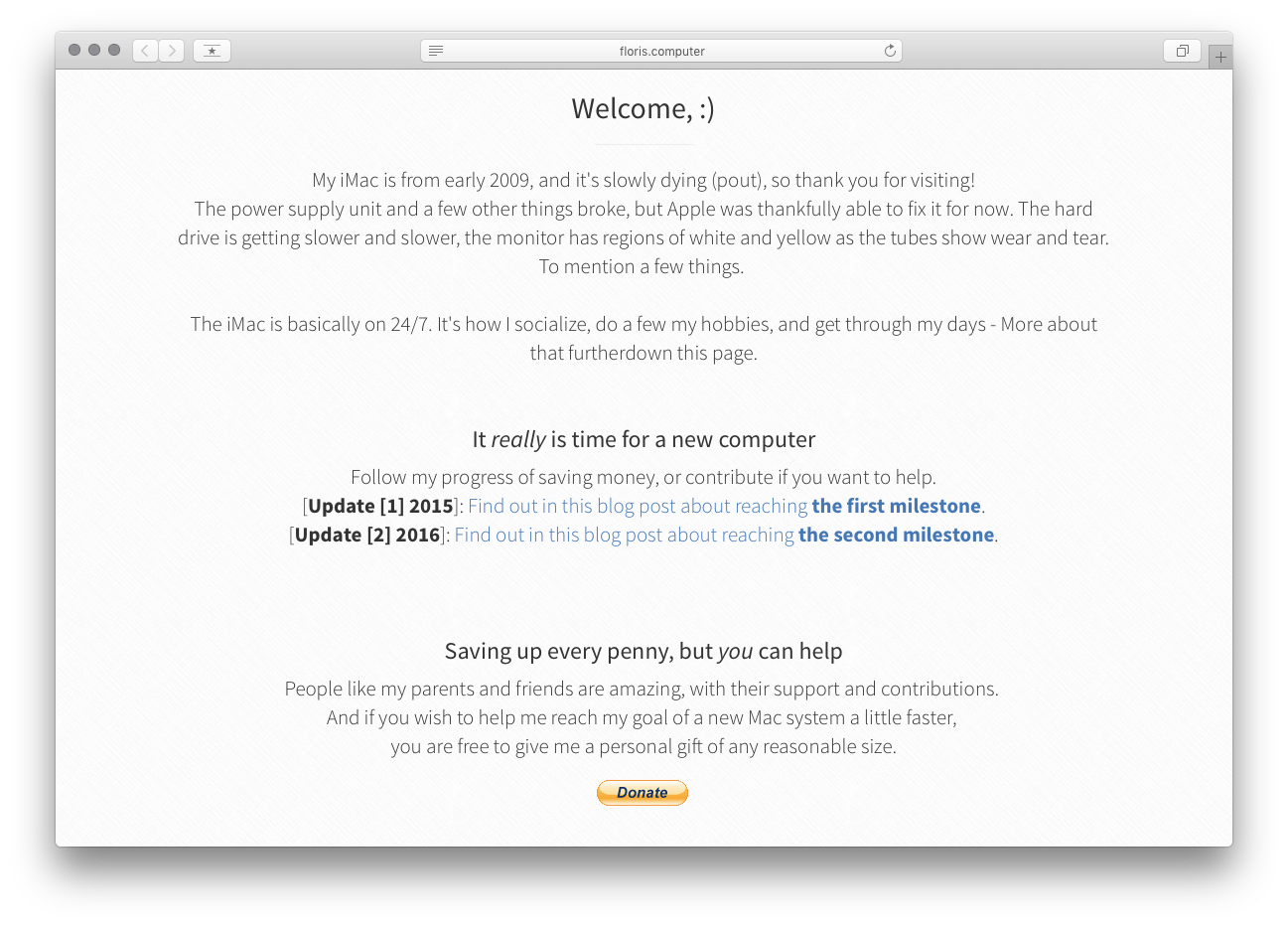 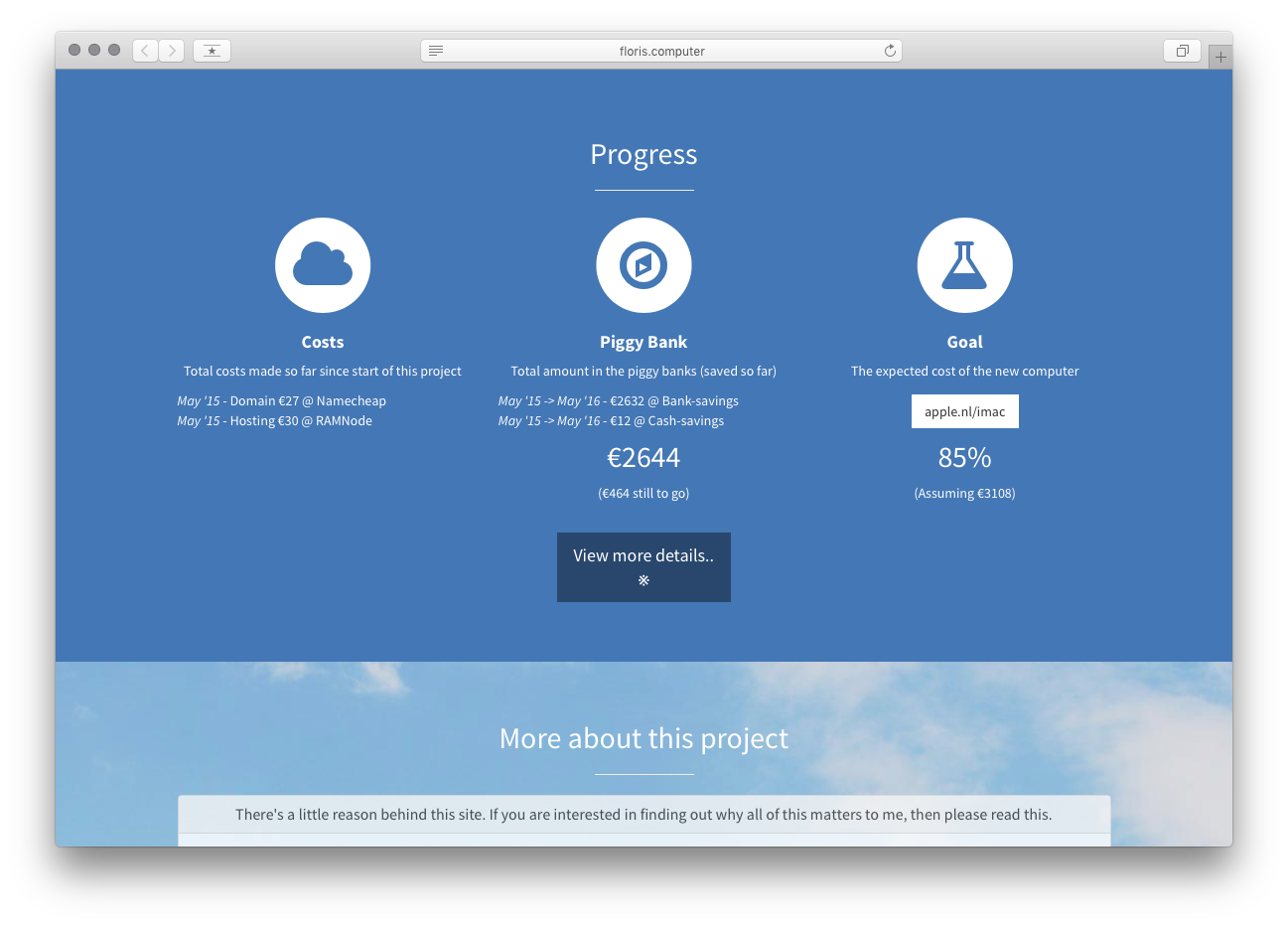 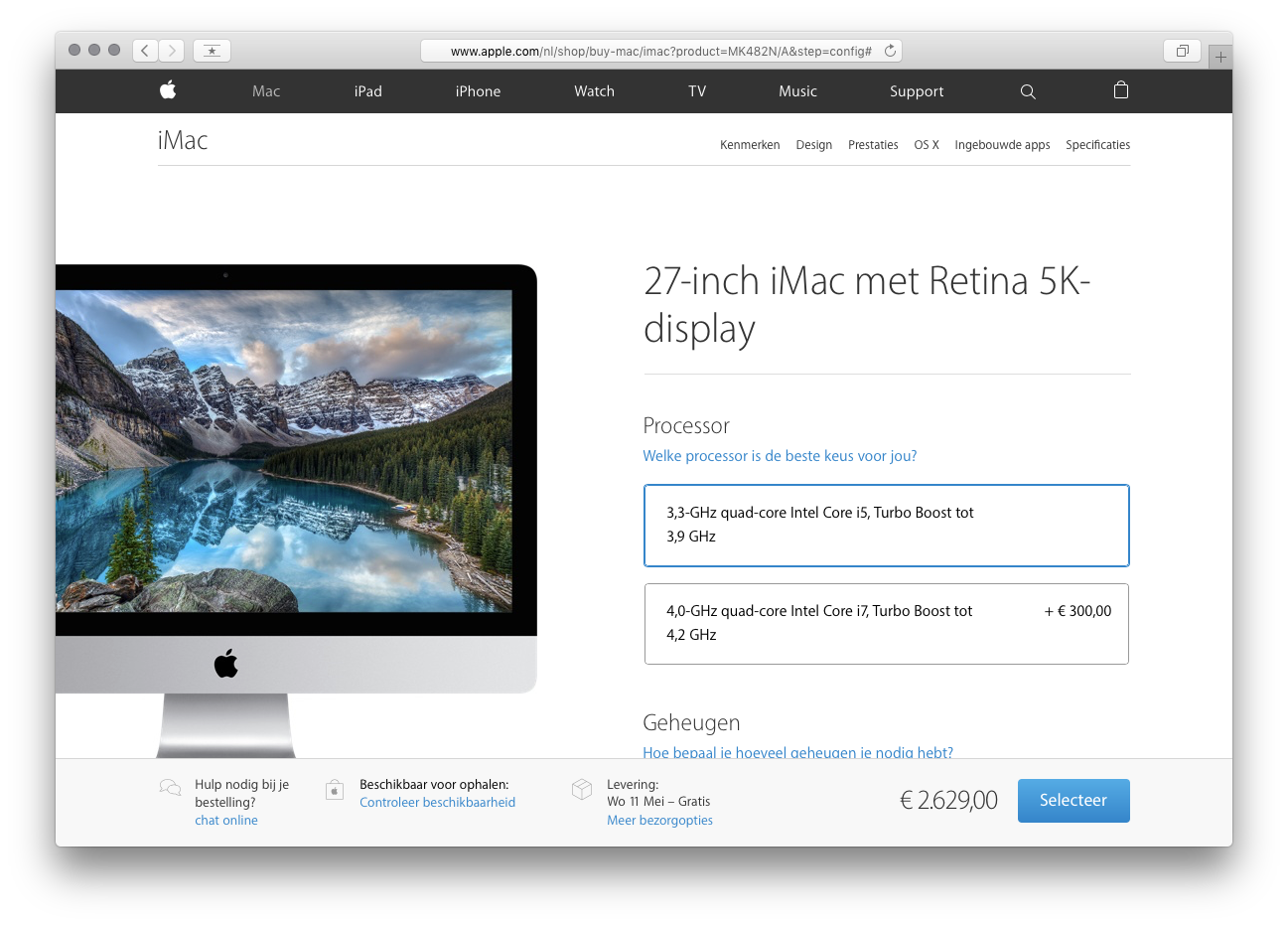 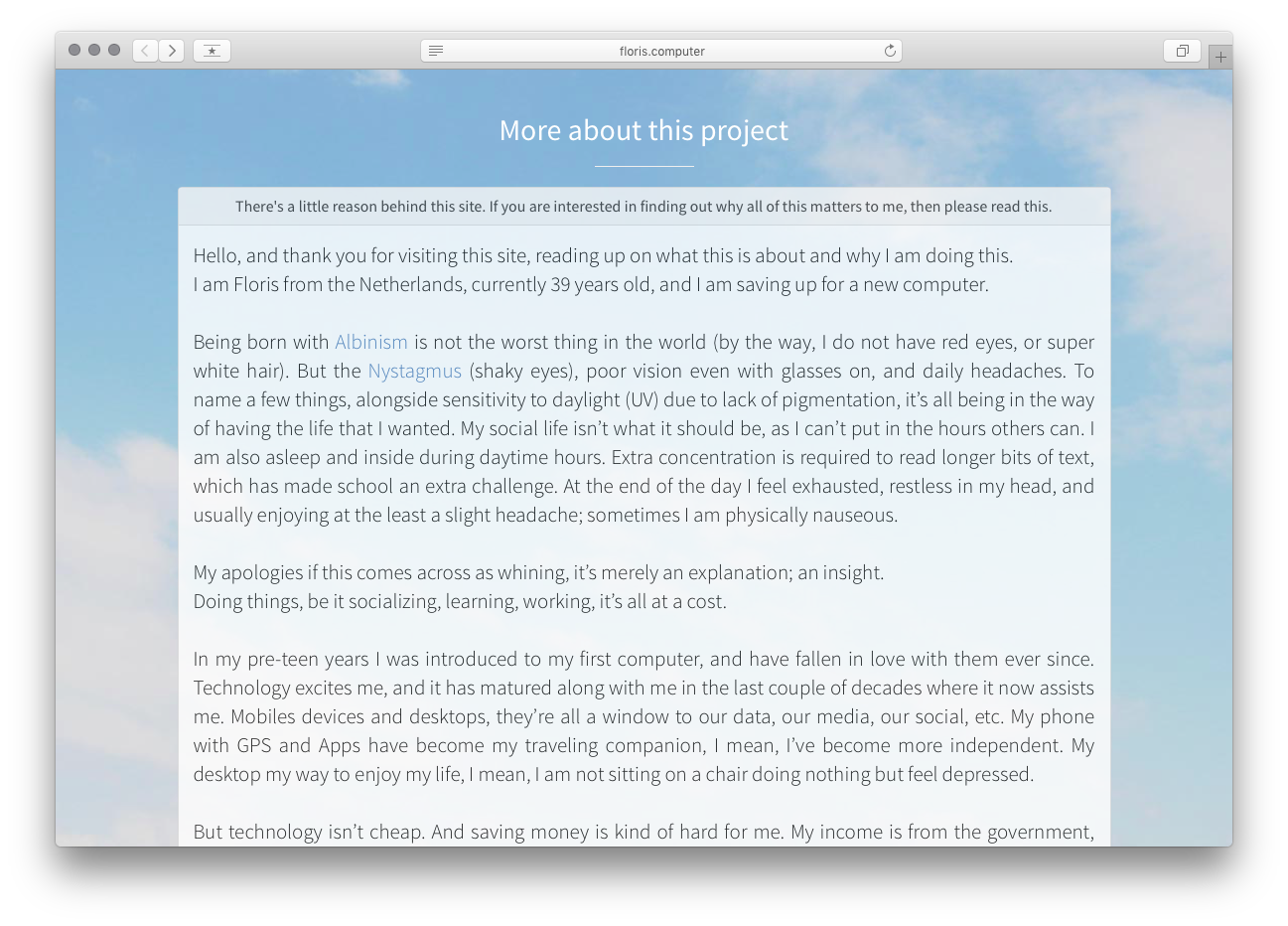 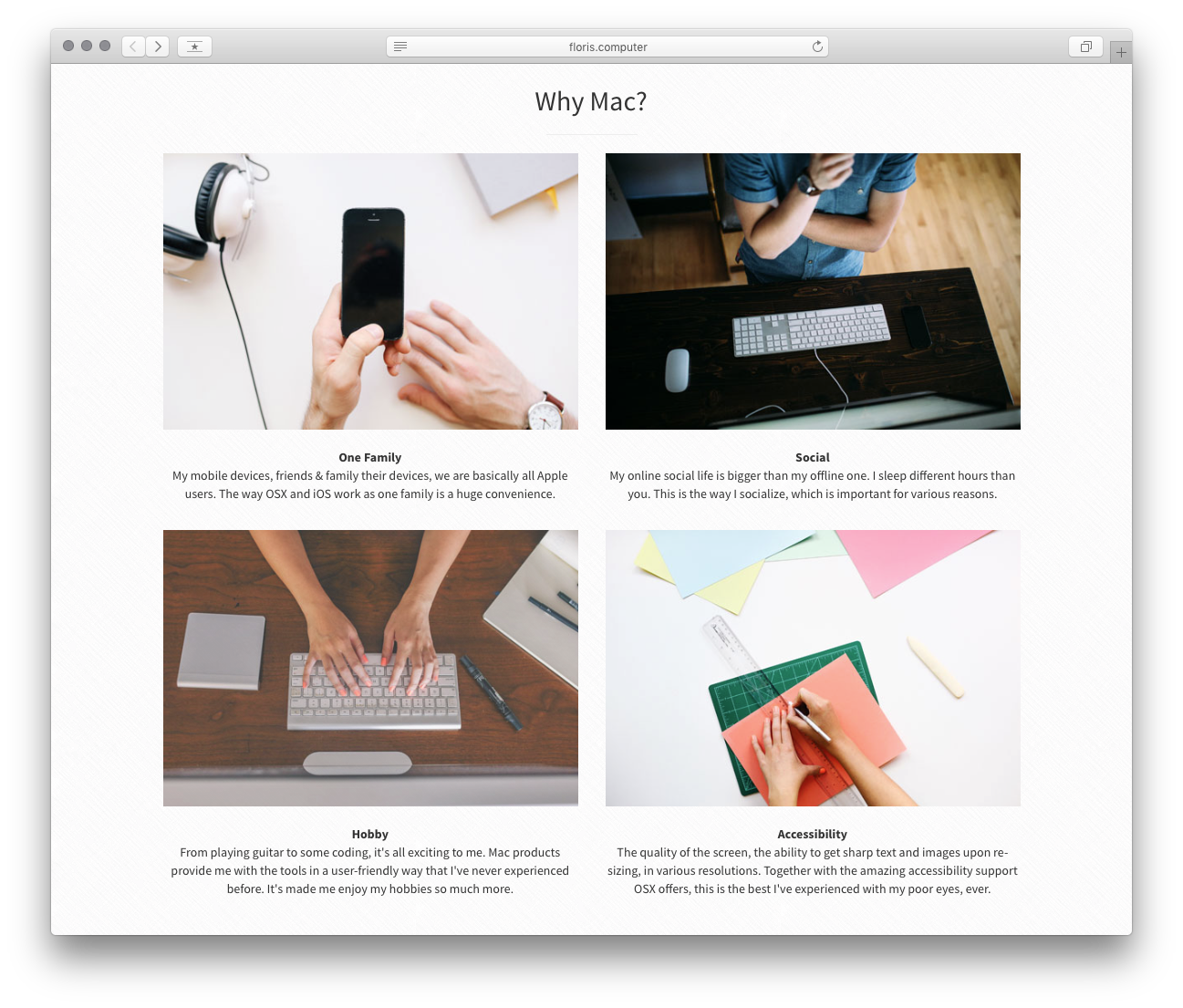