A Camera on the iPad

It’s now known that the iPad first generation does not have a camera on the wifi, nor the wifi-3g model. And that the rumored ‘there is space for it’, was just a rumor. The space is used by a screen censor it seems. This blog post is a summery of my thoughts about why we want a camera, expect one, and how to solve the problem (well, perhaps problem is the wrong word). 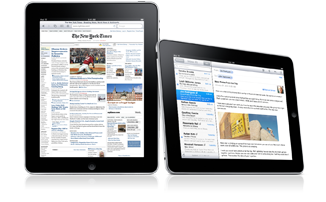 First of all, it’s Apple, they start small with a device that is sold as big. Meaning that in the next version there might just be an internal cam. That’s fine. Problem solved. But since they pulled the camera from the iPod Touch (for I strongly believe defective part reason), and everybody expecting one in the iPad, it’s a bit strange there’s not one built-in. I believe there’s a simple reason for this, besides potentially saving it for another branch release.

Apple likes completeness, a single device you can hold, and Apple loves to ‘nail it’, from the get go. They even mentioned it in yesterdays keynote saying they might be late, but have done it right.

And think about it, put the cam in the spot you expect it to be on the iPad and imagine how the video will look. Shot from below, going up, puffy faces and into people their nose, with alternative of holding it up right in front of you. More uncomfortable. Believe it or not, but the position is different than on a laptop.

One more thing, I like to believe that Apple also likes to overcharge for their accessories. I am sure everybody remembers the iSight for the Cinema Displays and Mac Pros. The iPad was introduced with loads of add-ons, such as even a USB-dongle (omg, are you serious).

Adding these arguments together, thinking from Jobs’ point of view, having users pay for an add-on, while not having to think about the uncomfortable position of the cam on the iPad, and an additional cost in production, saving battery life, and people not having to be on cam shot from below having people look up in their nose. I think it almost sounds logical to not include one in the first generation, and giving yourself more time to generate additional income via either a future generation iPad, or via an accessory, third-party provider, etc.

And I think the solution lies there. Since the iPad rotates on all four axes, you can hold it up, turn it around. And the pin-connector at the bottom is on top. A small pin-connector ready web cam can plug in on it, so it sits stable. And the cam itself could swivel up and down a bit. So you can put it on the table, or whatever, and positioned a bit higher, and in the right angle. This could come from either Apple directly, or from a third-party company. A plan-b solution could be a bluetooth webcam of course that’s wireless, so you can position it wherever you want. Or one that goes into the USB-dongle.

To finalize, I think users expect or want a web cam, because more and more social networks has profile images, and social games come with option to use your face or recognize items in space. And iPad being a book-reader too, I think it’s great to scan isdn numbers with it, and barcodes, etc, or just for VOIP Skype cam calling, etc. I can keep going, but it’s 2010 and not having a cam is almost silly, in my opinion, and I think a lot people share that opinion.

Flip iPad, put cam on pin-connector, and we’re good to go. I wouldn’t mind paying $29 for that.