Moving the iPhone just a little bit causes the screen to kinda move, almost like the camera lens is moving around in liquid or something. At least, that’s my experience with the 4, who knows, the 4s surely has a better lens, and better stabilisation. But I don’t have the 4s hehe. So I would not mind trying a mount that I can use to set it still on a table, connect it to my bike, a helmet, somewhere in the car, etc.

There are iPhone accessories for stands, mounts, clips, and what not. What I wanted was a mount. 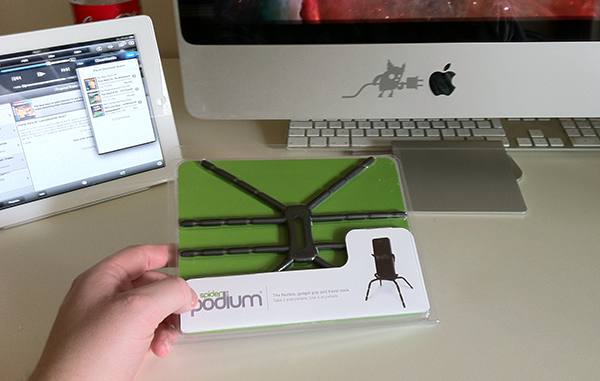 The Spider Podium seems to have flexible legs that let me hook it up on square, round, or flat surfaces. And during unpacking it was clear why they called it the spider. It’s black, thin legs, and it really does look like a spider. Kinda creepy.

One feature I am kinda missing is a way to have the legs snap into place. Helping you with some basic positions. But, it really isn’t hard to get used to this, and getting it to wrap around the iPhone and keeping it in place. A good feature is that because of these cluster of bendable legs you can move things around until the camera is free, you still have access to the home button, etc. I’ve played around with mounts that do lock into place, and they block the home button or keep pressing the sleep button on accident as soon as you pick it up.

The downside of it being this flexible is that you need a bit of practice to figure out the best position for what you’re trying to do. But I adapter rather quickly to it. And it looks a bit weird when it’s on the table. As mentioned in another blog post I really like good looking accessories and when this is standing on the table it simply isn’t. At least, it bothers me that there are a bunch of legs wrapped around the phone. But that’s me.

The package was simple, small, and easy to open. And in this video it’s clear why you need a mount – and two hands. A reason why I wanted a mount.

I want to point out a clear difference in my opinion between a stand and a mount. A stand is meant to keep the device at an angle so you can watch the screen clearly and for using the device. With a mount it’s probably mainly used for photo taking or video recording. It’s about the camera and it’s going to be a different angle. Something a stand can’t really offer.

Thinking what would be fun for the blog post that shows clearly the benefit of the Podium mount, but still showing the shaky-cam that is caused by the device itself, I thought it would be fun to mount it on one of my smaller-than-average dusty old guitar and play some blues.

As you can see, the shaky element is still there, simply because the device is being moved. But it’s mounted firmly to the head of the guitar with the spider legs, and during a test recording where I didn’t move the guitar the screen was rock steady. My point being is that this really helps, but it can’t fix the camera itself.