It used to be quite expensive to order a few gigs for the Powerbook, especially from Apple.com – but now Kingston has some proper 2x 1GB ram sticks for the latest edition of the November 2005 Powerbooks. I paid 30 euro incl. shipping. So nice.

By default it came with 512MB but we upped that to 1GB which was the max with the online order at that point. Now 4 years later with Leopard 10.5 installed I decided to keep the Powerbook until I see an advertisement requesting this laptop for a good price, and then I will review the situation again. But .. this does mean I want to use it for blogging, broadcasting, twittering, browsing, emailing, skyping, being lazy on the couch and in bed, watching movies on it or stream music and movies to the TV, etc. A bit more breathing space for the Powerbook won’t hurt. So going from 2x 512MB to 2x 1GB.

Azerty.nl had the RAM and it arrived quickly. I didn’t have the right screwdriver, but my dad had. My friend Wilfred helped me unscrew the back and take out the old RAM and insert the new RAM. It was quite easy. Booted .. no weirdness, no popups, no initialization msgs, etc.. And the “about this mac” shows 2GB total. So rebooted … yep, still there. All good.

Upgraded to iLife09 and the install compared to the previous attempt went great. It saved handful of minutes. But what was impressive, is that it simply was faster with loading multiple applications and switching between them. It of course uses less hard drive for swap, and more RAM. So .. feels more ‘snappy’.

For the 30 euro, a worthy upgrade to max out the memory on the powerbook. 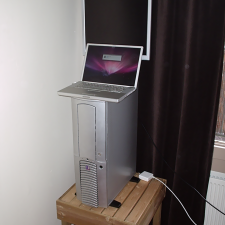 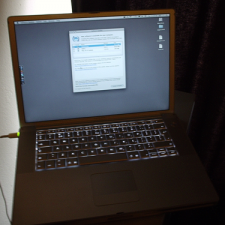 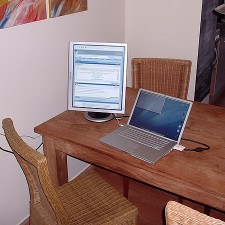 Originally I wanted to write my opinion about the iPhone 5 but it did not feel like it was as much of an significant update as expected, and the highly anticipated features weren’t really there. Read more…

A Camera on the iPad

It’s now known that the iPad first generation does not have a camera on the wifi, nor the wifi-3g model. And that the rumored ‘there is space for it’, was just a rumor. The space Read more…

Tip of the day if you ask me .. Turn on screen-sharing and limit it to an account.