With Winter closing in on 2007 my parents noticed that one of the two new kittens on the barn was being bullied out of the farm as well as the stables. And I was asked if I could use the company. Yahuh. Of course! I’ve called her Sasha and she’s been enjoying her lazy life in my flat ever since. (My old blog post: I got myself a LOLCAT and: One year Sasha) 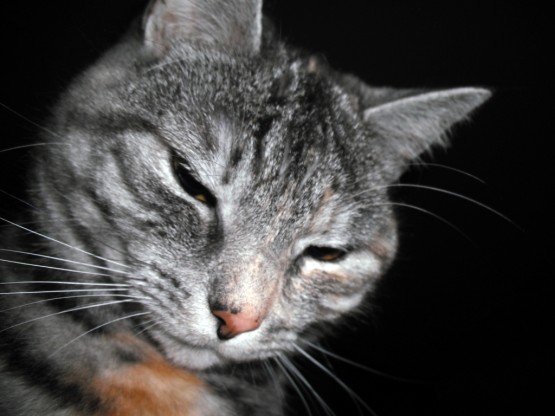 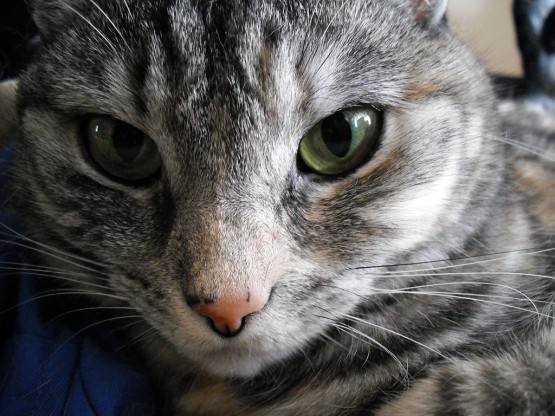 She was quite used to being outside the first six months of her life, and this meant that she didn’t understand the difference between my plate of food versus sleeping on the dvd-tray of my computer. Or that climbing the curtains isn’t the same as a tree. It took a bit of adjusting, but with enough patience (and inside rage) we have managed to understand each other. She patiently sits on the floor staring me down with every bite of food I take. And she’s enjoying the balcony when I am there, because I can’t leave her alone on it. The curtains are also safe. She just jumps from chair to chair to table to couch to.. instead.

Want an example of her rampage and me trying to control my rage because she’s just a kitten and shouting at her doesn’t do any good anyway? I mean, fear won’t work, but it got pretty close to me losing it when she tried to take a turn and didn’t make it, pushing over my guitar – and breaking it. 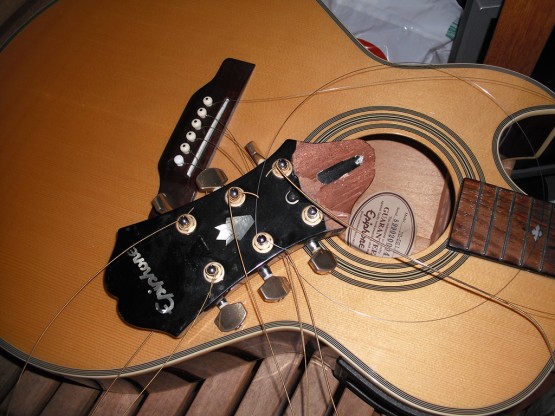 The only time I went inside and left her on the balcony for a minute we heard a bang and my neighbour showed up asking if I lost a kitten. Thankfully she panicked and didn’t completely freak out and jump of the balcony .. 8 floors down. Since then I have been more of a prison guard keeping an eye on her when she’s getting her 45 minutes in the yard. 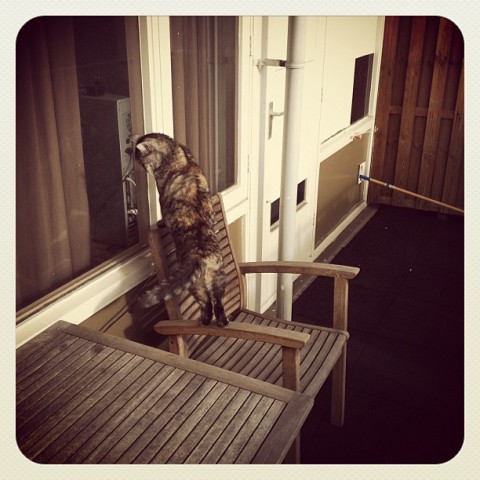 It’s not the only thing my family contributes to my cat. My parents and brother/sister all chip in to buy litter box filler, cat food, toys, etc. My father recently made a full fledged cat play-house for Sasha, for my birthday. So awesome. 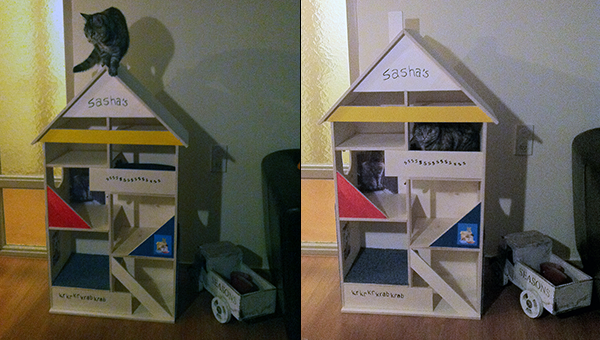 Talking about family. When I go visit mine, Sasha’s brother is at the farm, usually running up to me to say hello and smell his sister. He’s obviously family because they’re equally cute, and share the same characteristics, including being lazy. 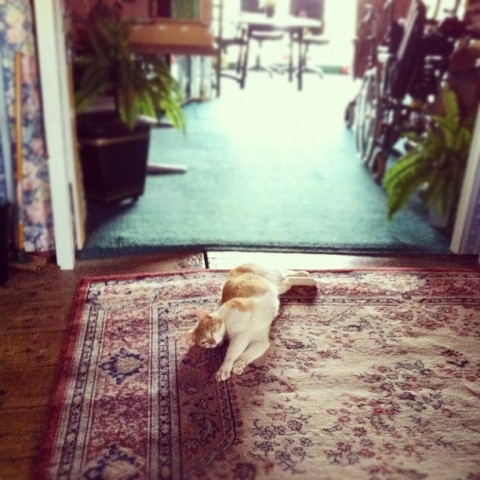 Leaving the Skype camera on and calling myself from the iPhone, I’ve learned that Sasha is usually waiting for me to come back home quickly, when I leave her alone for the afternoon or a nighty. How adorable is that ^_^ 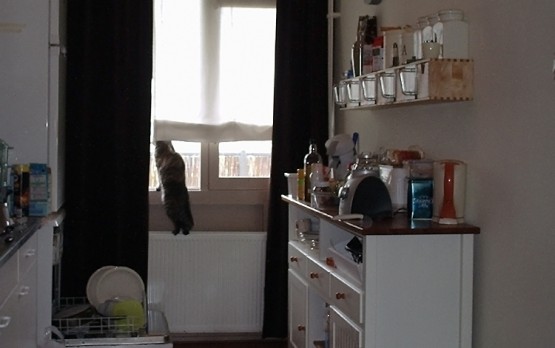 And it’s my family that also help me when it turns out Sasha has some sort of allergic reaction to something, and needs to go see the vet for a checkup after puking all night. 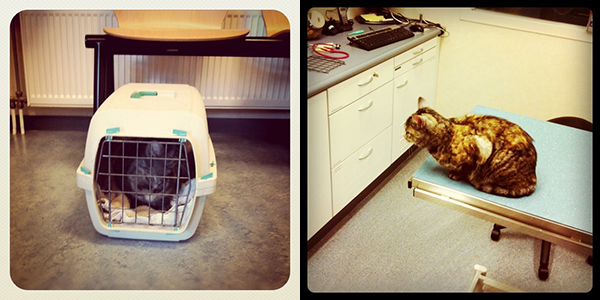 But recovery is always best when you know you’re the queen of the living-room and have the biggest comfy chair available all to yourself, and then STILL use extra pillows to super-comfy it. What? So I spoil her.. 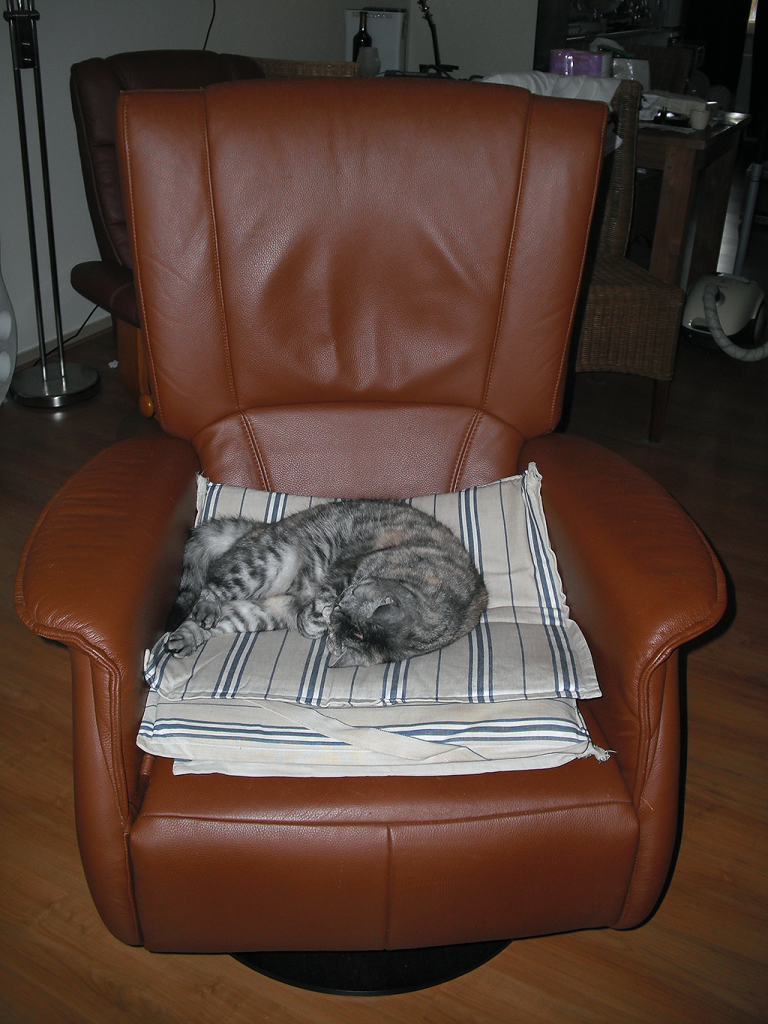 She almost never gets any milk, so this is a treat for her 🙂

And she sure loves technology.

Anyway 🙂 As you can see a lot has happened the last five years with Sasha, she’s all grown up now and enjoys being lazy all day, every day. But she plays frequently, seems happy, and despite an occasional vet visit she doesn’t seem to hate me yet. She’s five years old now, just over 4 KG and in good health. Judge for yourself: 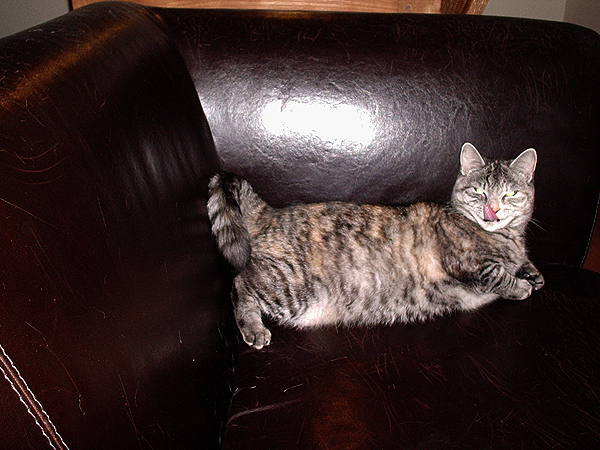